Ed: As as as I can observe from the number of photo shots coming in and the explanations from Tali and Kee Mun on what "really happened" that night I can deduce there are plenty of confusions amongst those not in attendance. However I can upload these preliminary reactions from people on the ground that night, Kee Mun and Tali. The rest of the 精采类 we wait till further report!

I think it was INCREDIBLE that the KLites made it their business to meet the Ipoh Mari guys in this 2nd Round! The 1978ers Spirit is very much alive. Thanks guys for the efforts! 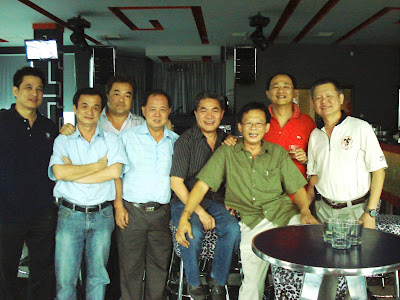 I can't help but feel that from this photo we can see that Seng Kian, Kee Mun, Kong Jai and Hock Choong "looked" HaPpy, but NOt ThE OThEr FOUr gUys! Wong Sir is missing in this pic, gone to take a sip of his coke?! 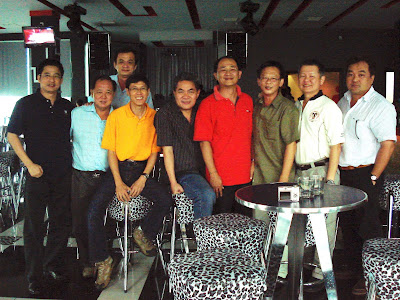 This is MUCh BeTtER, eXCEpT gruMPy oLD JEfF oNG! Oooh, Chest out, stomack in! Wong Sir re-appears in this pic! 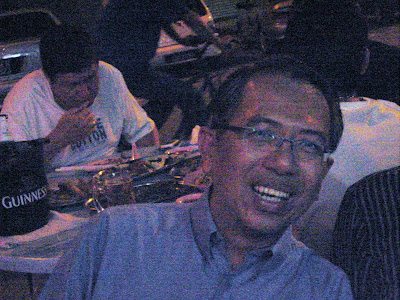 Siew Yee Wah the official 1978er PHOTOGRAPHER wearing a sheepish 苦笑 because he knew he owe us the Ipoh 1st Round photos ! I think the 饿鬼 at the back of him is Siew Fook Kheong???

Just to "塞着啪口" first prior to the "FULL REPORT".

"YEE WAH" sorry to say that I am a bit better than you . Ha ! Ha ! Ha ! Enjoy your photo section with the PAKATAN.

MOST OF US WENT TO THE TOILET MORE THAN 3 TIMES !BECAUSE WE HAD 3 SESSIONS ON THAT NIGHT !

WE STARTED IN THE ' PARADISE ' WITH 10 COMRADES & DINED IN THIS OKP'S FAVORITE MAKAN PLACE & ENDED UP IN THE SAME ' KOK ' WITH ONLY 5 SURVIVORS. THE REST WERE RETIRED EARLY. BACHA 放我地飞机！AWOL ! 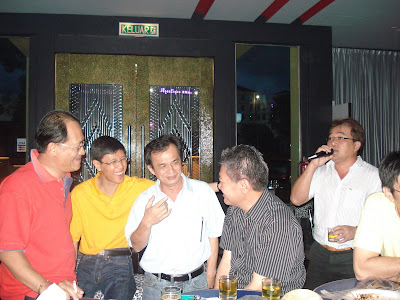 猫王 is belting away his 陈年老歌 whilst the rest of the GANG behtahan him! In his enjoyment of hearing his own voice (typical of BOSSES) 猫王 still hangs on to his Green Label! 佩服， 佩服 .....

WE HAVE MET A LONG LOST FRIEND - BAO-BAO. EVERYBODY WAS IN VERY JOVIAL MOOD. KEE MUN, SENG KIAN, KONG JAI , HOCK CHOONG & BAO BAO WERE ALREADY AT THE SUMMER PARADISE WHEN I ARRIVED. BOON CHEE, KIM PENG CAME LATER FOLLOWED BY WONG SIR . ROUNDS OF BEERS WERE COMSUMED. TONG LEONG CAME LAST AFTER BAO BAO ADJOURNED. THAT'S WHY WE DO NOT HAVE TONG LEONG IN THE GROUP PICTURE.

EVERYBODY HAD GOOD FUN; DRINKING, CHATTING, SHARING JOKES & SINGING. OF COURSE, THE SINGING WAS STARTED BY OUR 猫王. KONG JAI & SENG KIAN ALSO SHOWED THE SINGING TALENT ! WONG SIR WAS DRINKING COKE AS EXPECTED THROUGH OUT THE WHOLE SESSION. AT LEAST 3 - 4 GLASSES, IF I AM NOT MISTAKEN

WE WERE ALL WAITING FOR THE ' BATCHA ' TO COME BUT HE DIDN'T TURN UP. HOCK CHOONG LEFT EARLY FOR ANOTHER PROGRAMME.
( NOT MUCH HAPPENING HERE, JUST A BUNCH OF UNCLES ENJOYING THERE HAPPY HOURS TO THE FULLEST. LUCKILY, THE VENUE WAS NOT CROWDED. )

KIM PENG LED US TO A MAKAN PLACE IN OLDTOWN, SOMEWHERE NEAR THE IPOH PADANG, AND WE CONTINUED WITH THE ' SNOW BEER' & THE LEFTOVER BOTTLE OF GREEN LABEL FROM THE IPOH ROUND ONE. FOOD WAS DELICIOUS BUT NOBODY REALLY PAID MUCH ATTENTION TO IT. (Ed: Hmmm I wonder why that was? Was it because these bunch of uncles had other ulterior motives in mind? Tali would have to tell us more, don't you think?)

WE CALLED UP SIEW YEE WAH & INVITED HIM TO JOIN US. EVERYONE WAS ASKING FOR THE PHOTOS WHICH HE HAD PROMISED TO SEND US. ( USUAL EXCUSE - VERY, VERY BUSY - LAH ! ) A CALL WAS MADE TO HENG EK KOK & EVERYONE HAD A SHORT CHAT WITH HIM.

THE DRINKS CONTINUED TO FLOW & SUGGESTIONS WERE MADE FOR THE NEXT ROUND TO BE HELD IN K.L. ,WITH SENG KIAN , BOON CHEE, MORE THAN HAPPY TO BE THE NEXT HOST. ( AND OTHER VENUES - SUCH AS PLACES TOWARD THE NORTHERN TERRITORY WERE ALSO SUGGESTED ! ) (Ed: What Northern Territory? China or NT in Australia?) THE ONLY REQUEST IS THAT WE WOULD LIKE TO HAVE THE OZ , CHINA & KIASU FELLOWS TO ATTEND THIS ROUND 3. SO, WE ARE SENDING THE INVITATION OUT MUCH EARLY & LET YOU ALL TO HAVE SOME EARLY PLANNING. AS KC MAK SAID, WHY WAIT UNTIL NEX YEAR ? ( KC, YOU BETTER START TO PLAN YOUR SCHEDULE NOW ! ) (Ed: Some people think that KC Mak had already dropped enough hint that he might not be around for the 2010 Reunion.....)

KEE MUN WAS THE OFFICIAL CAMERA MAN & BUSY TAKING SHOTS AFTER SHOTS & EVEN VIDEO TAPING. I HAVE NO IDEA WHAT HE HAS SNAPPED THROUGH OUT THE WHOLE NITE. ( EVEN IN THE KOK ! )

THERE WERE THE USUAL ' WINE & SONG ' SESSION IN THE SAME ' KOK ' AS SOME OF YOU HAD PATRONISED , WHICH CONTINUED UNTIL PAST MIDNIGHT. DETAIL OF HAPPENING IN THE KOK WILL NOT BE REVEALED UNLESS WE GOT THE CONSENSUS OR ' REWARDS ' ( as KM has mentioned ). ONLY ONE HINT, THERE WAS ONLY FIVE SURVIVORS AT THE KOK. (Ed: Have you considered maybe the rest of us do not want you to air your dirty laundry out in this post. So thank God you did not!!!)

OVERALL, I PRESUME EVERYONE PRESENT HAD FUN, AND WAS HAPPY TO MEET SOME OLD FRIENDS, AND HAPPIER TO KNOW MORE ABOUT THE OLD FRIENDS , AND EVEN HAPPIEST TO DIG OUT SOME OLD FRIENDS' UNTOLD STORIES . (Ed: PRESUME? Hello??? Also do you Tali and KM care to send follow up posts on the "untold" stories???)

THANK YOU. MATES. SEE YOU GUYS IN THE NEXT ROUND. 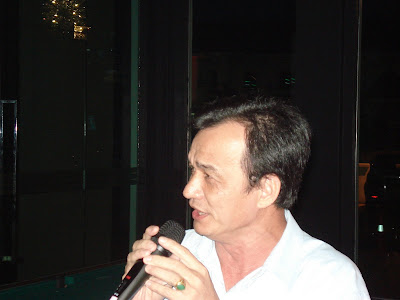 Could Tali Be "Upgraded" To 歌王？ No Way!
(Ed: SIA's airfare Melbourne-Singapore return is AUD730 for travel before 30 Nov. And so Kin Fong and I will have our hats out looking for donations from you guys!!!!)

One thing for sure, we are all happy to meet each other again, we joked, shouted and one can tell that it is really from the bottom of our heart. No barrier what so ever between us and we are all back to '78 school mates.

Would like to thank those who travelled all the way back from KL and also.....


Boon Chee also taken some photo during the "Makan" time so I believe that he is editing right now and will get us posted soon.