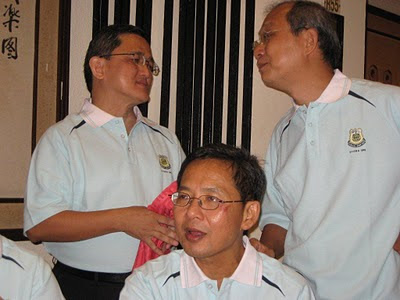 It was a sunny morning on Saturday 21/8/2010 when we sent Ek Kok off. Members from the budhhist group were there.

Our classmates that turned up were AuChee, Jeff, Kong Ho and wife, Yee Hong, Seng Kian,Philip, and Chun Ngan who came all the way from Butterworth.

Yeah, 22nd Aug was his b'day. In fact, he had planned to meet us one more time by inviting us to his new residence for house warming. According to the youngest sister, Serena, since our met up last year, EK were indulging to go over all the photos we posted frequently.

He would tirelessly introducing us to his family from the photos and felt joyful. He looked forward most to our scheduled gatherings and at times called me numerously to confirm.
A simple, but honest, hounorable, intelligent, silently hard working, kind and wisdomised soul he was. Together with his family, we will miss him for a long time.

Serena asked me to thank you , on her family behalf, those came in these few nites. Thanks also to those who sent in or convey their condolences. Chan Chee Leong (S2) from Canada called to KM to convey his condolence. Ooi Boon Hock called from B'worth. Friends from S2 have called in as well.