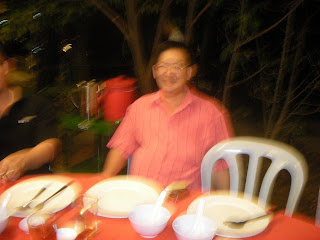 ( sorry about this blur-blur picture, but that's the way to show the true colour of James Wong )
This James Wong is an old classmate of mine during the secondary school. We have lost contact for more than 30 years. Catching up with him in the last few months & obviously he is very supportive to our group mail. He would on & off send in some cool jokes . Claiming himself as a nut towards the computer tech, he is yet to forward his cool stuff into our group blog yet.

He was nicknamed ' toothless tiger ' in those days & he has now became a fierce tiger, biting you silently with his hilarous jokes. Some of them are too sexy that I can't reprint them in my blog !

He has been coming back to his hometown very often and we used to have ' snow beer ' sessions in the older part of the town. ( hey, he is a good drinker ! )

It just popped into my mind while laughing through his jokes tonite : there are so much of similarity of this James Wong to that late James Wong ( 黄沾, 又名不文沾 ) of Hong Kong ! 搞笑一派 ! Is it just a coincidence or he purposely take that same name ??