Tonight we met as a group for our 2009 Ipoh Reunion and some R&R. Some had more R&R than others! I will leave it to you to make the interpretations! Suffice to say many of us had not met for the past 30 years and so the scenes at the Reunion were a bit emotionally charged at times. 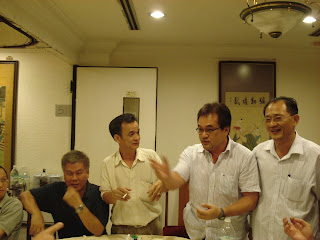 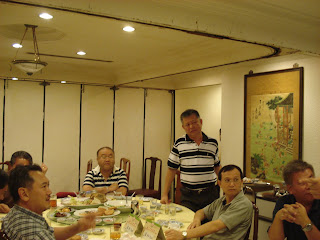 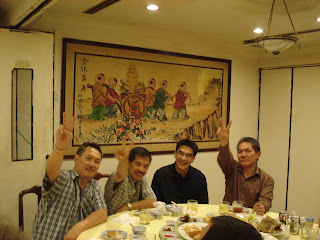 Yok Seng was the organiser of the 2009 Reunion event, and he did a splendid job. We awarded him THE BEST ORGANISER OF THE YEAR award because we did not have any other yardstick to base our judgment on. Albeit, we were "generally" happy that he was competent and I would say no one would object if we re-nominated him for the organising committee chairman's job for 2010! I think in coming days YS would send some suggestions to the Group as to the 2010 venue and perhaps even associated activities.....
Sneak previews for the 2010 Reunion:

Psst! I didn't tell you this secret!
Pre-dinner drinks (beer only) were available at the Excelsior Hotel's Karaoke Fun Pub (the live band only started strumming and singing at 8pm, by which time we were trooping out to the restaurant for our dinner) for early birds. Dinner started at 8pm at the Oversea Restaurant opposite the hotel. We were seated in 2 tables, and were offered sumptuous food. Many were more impressed with the array of whiskey available (12 years, 15 years, black, green blue etc)than the food and promptly dived for the booze than the food! The whiskey lubricated those present and it was not necessary at all for those present to have to break the ice. Such was the power of the liquid.

It was note worthy to state that all present were merry and unpretentious. There was no barrier, we did not have our guards up and enjoyed each others' company and were happy to renew friendships. We were transported back in spirit to when we were boys in school uniforms once more that night .... 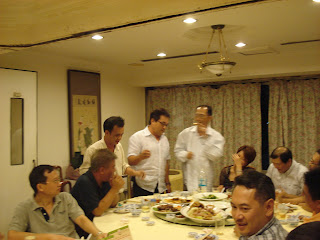 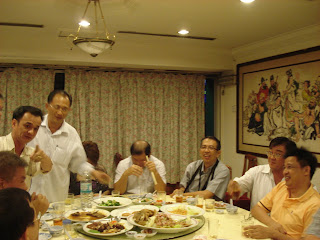 Tuck Weng, Chee Keong, Yok Seng, Kong Jai, Kong Jai's you-know-who, Fook Kheong, Yee Wah, Tuck Ming, Boon Chee
" Yok Seng: What the @#$%^?
Fook Kheong: There we go again ... "
Tuck Ming: I am putting my foot down! Oops I can't see my feet! "
At some point the dinner party reached its crescendo and I felt my ear drums were doing their maximum workload trying to cope with the din and voices (read noise). It was truly difficult to want to make a conversation, let alone be heard in this boisterous crowd! Such was the dBA (Noise level) and gaiety that was present at this reunion. I cannot begin to imagine if we put these 17 people in a board room meeting and ask them to express themselves, can you?
I can say on behalf of those present that were were happy to be in each others' company that night. It was quite touching and out-of-this-world. Are all reunions dinners like The One we just had?
After dinner we adjourned for karaoke at a nearby joint. Tuck Ming left after the dinner (his wife rang, apparently; or was I mistaken?). The guys who came from KL for this occasion (Seng Kian, Boon Chee, Kong Ho, Fook Kheong, Au Chee Keong, Kong Jai & partner, Weng Wah) gladly submitted themselves to this activity and we marched to this KOK. I mean we did not want to be seen as anti social or "weak" did we?! (In retrospect, Tuck Ming's wife probably did him a great favour ..... )
Mummy 7 was promptly summoned by you-know-who to his presence and pretty young things from one neighbouring super power country (some 6 hours away) were paraded in front of eager customers. Not all were weak-kneed but some were happy that the girls were there to provide some help with their singing or just for their company. Singing and chatting continued until just past mid night. We parted company and bid farewell. Some of us went for tauge chicken, chicken feet and hor fun at Oon Kee. Kee Mun and I left at 1.00am and hoped that the rest of you got home safe and sound with some fond memories created and stirred, ready for the big one next year.
Best regards, SP
P/S This is my brief summary of our reunion dinner for 2009. E&EO. I cannot guarantee clarity and correctness of information presented here as I might still be trying to recover from the said activities the night before! I welcome you to add your comments and new posts to this brief. If you are busy like some of us believed you were (but you read this blog as you do other Google group mails) then I hope you can at least get your secretary to send in some comments or posts on your behalf; after dictating to her your view of course! Cheers and many thanks for your company and friendship!
"We Rock The World" by Aus Pilot at 2/22/2009 12:30:00 AM